“Classics” (MCA; 1989) There’s a reason this “Greatest Hits” package is entitled “Classics.” I think that’s an appropriate title because Triumph’s music can be heard on the classic stations, and, …

“Surveillance” (TML / Universal; 1987) After the disappointment of some fans with 1985’s “The Sport of Kings,” Triumph recorded and released “Surveillance” which, while not a complete return to form, … 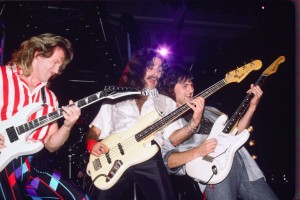 Toronto seems to be Canada’s home for heavy metal. Now it’s time to watch out for Triumph. Every sign points the band to the top of the heap in a competitive, noisy struggle for the affections of a young audience. There have been four albums, so far – the fifth is due in mid-July. The first, Triumph, went gold, and the three since, Rock and Roll Machine, Just a Game, and Progressions of Power, have all gone platinum in Canada, and selling close to 400,000 copies each in the U.S. All the albums have been produced by Levine – and their success has led to several requests to undertake productions projects for other major acts – requests he’s declined, so far, to devote his full energies to his own band.

“Live at the US Festival” (TML / Universal; 2003) Triumph fans will love the fact the band’s live performance at the legendary US Festival in 1983 is finally …

“Live at the US Festival” (TML / Universal; 2003) Triumph fans will love the fact the band’s live performance at the legendary US Festival in 1983 is finally …