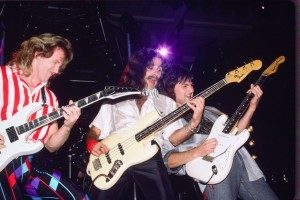 Toronto seems to be Canada’s home for  heavy metal. Rush, the most successful of Canadian bands, is based in the city. April Wine’s lead singer, moving force, and chief songwriter, Myles Goodwyn, makes Toronto his home after years in Montreal. Goddo, finally signed to another label after a couple of years in the wilderness, is a Toronto institution. And  Max Webster, the quirkiest of all bands – and now in the process of going through changes one more time – has always gained its inspiration from the city.

Now it’s time to watch out for Triumph. Every sign points the band to  the top of the heap in a competitive, noisy struggle for the affections of a young audience. If Triumph succeed in the way they want to, they can tank themselves and the hard work of well over a decade in the music business. The  bands three members – Rik Emmett, Gil Moore, and Mike Levine – are hard-working  optimists. They live the spirit of their music, say the hell with failure, and  push for success in every way they know how. If this means, from time to time, that they’re abrasive with agents, with managers, with their record company, or  with promoters, it doesn’t really matter – they simply want no one in their way.

It wasn’t always a success story. Gil Moore had started a group, originally called Abernathy Shagnaster’s Wash and Wear Band, back in  1969. The group went through any number of directional changes, and musicians  came and went with regularity, before the group finally came to the point where it played cover versions of everyone else’s material. Moore remembers the final  gig, in 1965: “I had the flu; the club owner hated the band. To make it worse,  his office was behind the coat room under the stairs and I almost had to get  down on my knees to get into there. He paid us very grudgingly, and when I left I really gave some serious thought to packing it all in.” Mike Levine, the  band’s bassist, felt very much the same way, but after some soul-searching, the  pair decided to give themselves one last shot.

So they went looking for a guitar player. After some unsuccessful trial runs, they discovered Rik Emmett, 21 years old, brash, loud, noisy, and hammering out the sort of sounds Levine  and Moore wanted. They watched Emmett perform, and finally convinced him to quit  the trio he was working with and join them. Everything, from the name of the band to the material they would write and play, would be “success motivated” they decided. Against the odds, they embarked on the course. “At the beginning,  our biggest problem was that we were too honest,” Emmett says now. “We’d sit down with journalists and say ‘now this is how we put our show together, and  this is how we have our finances set up, and this is how we plan to get from point A to point B.’ They couldn’t believe we were so articulate, or so  determined. Maybe we should have told them we were just a bunch of dumb clucks who didn’t know nothing – instead, we told them we intended to put on a big  flashy show and make money. And from then on we had to fight reviews that either  knocked us as ‘corporate rockers’ or ridiculed us for hiding behind a big light show and a lot of theatrics. It was uphill, and don’t let anyone tell you it  wasn’t.”

There have been four albums, so far – the fifth is due in  mid-July. The first, Triumph, went gold, and the three since, Rock and Roll Machine, Just a Game, and Progressions of Power, have all gone  platinum in Canada, and selling close to 400,000 copies each in the U.S. All the albums have been produced by Levine – and their success has led to several  requests to undertake productions projects for other major acts – requests he’s declined, so far, to devote his full energies to his own band. “The material we  create has been a key factor in establishing ourselves. We all contribute to the  development of the songs. It generally starts our with Rik – or sometimes Gil – coming in with an outline, some lyrics and a basic musical structure. We then go  over the various parts, and we all add our own ideas.” Levine explains. “Very  often, what happens is that we come up with something that’s good, but isn’t  really right for the band – so we demo it and send it our, and hope we can  persuade someone else to use it.” “We work very hard to come up with songs that  both reflect the Triumph image, and can be reproduced well by the band on stage.” Adds Moore, “We try to keep it as ‘hard’ as possible. But sometimes  we’ll throw in an exotic vegetable for our audience to digest!” Moore feels the band owes something more than a one-dimensional product to its fans: hence the inclusion in each album of what some critics might call an esoteric indulgence,  or else a spotlight for Emmett’s guitar virtuosity.

The growing success  of the band has given them a considerable income – certainly the group has a  degree of financial leeway that was unthinkable in the days of Abernathy  Shagnaster. The group has expanded its warehouse and office facilities in  suburban Mississauga to include a 24-channel recording studio, which they claim has one of the best ‘live’ sounds in the business. And although Doug and the Slugs produced their best-selling Cognac and Bologna album in the  studio last year, the premises are primarily Triumph’s private domain. The  upcoming album, provisionally titled Allied Forces, was entirely recorded at the studio, which they’ve christened Metalworks. Levine believes that each  record has been a progression. “I think we’ve matured with each record. I’m  using more keyboards now, and we’re trying to get some different vocal sounds.”  Having its own studio has been of enormous help – “we can create something  without worrying about the time it takes, or studio costs. We have the  opportunity to experiment until we get it exactly right.”

With the fifth album out in mid-July, the band will take off on the road again – its success is firmly based (as is that of Rush) on the productions and performance of a good  stage show in support of a good new album. Emmett, Moore, and Levine write the songs, produce the records, design the stage presentation, manage most of their own business endeavors, and play the gigs. They’re firm believers in the old principle that to do it right means you have to do it yourself. So far, they’ve  also proved that you can be very successful. And they’re not worried for a second that they can’t keep the momentum growing and growing.