Attention all Triumph fans – there is a flurry of activity going on with everyone’s favourite Canadian arena rockers.

To celebrate the release, there are a number of different contests open to fans for a chance to win the DVD-cd, a chance to attend a screening and more.

Valentine’s day is right around the corner, so we put together a bundle for you & your Valentine!!
Just add this in with breakfast in bed, Plus a few foot-rubs and you’ll successfully avoid the doghouse another year. 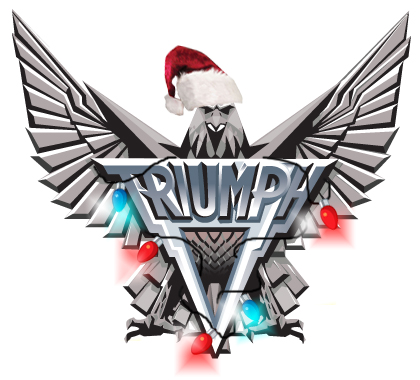 Canadian hard rock trio, TRIUMPH are celebrating the 2010 holidays by giving fans worldwide the gift of music with “The Twelve Days of TRIUMPH!” starting December 13 and ending on Christmas Eve, December 24, 2010 TRIUMPH will release a VIDEO, PER DAY on their official YouTube channel (www.youtube.com/user/TriumphAlliedForces.)

Frontiers Records to reissue the original TRIUMPH catalogue in Europe. 10 classic albums, in digipak version and with the original tracklistings, will be released on December 3rd. In addition, a limited collector’s edition Box Set entitled Diamond Collection which will include all the 10 albums in vinyl replica, and will feature the artwork from the original vinyl edition of the albums.

While future plans remain uncertain for the band, and after the recent reunion shows, the time to re-live the impressive legacy of their music has come. This new set of reissues is a real present to the Triumph fans, both old and new, who now have the opportunity to own these timeless masterpieces of Classic Rock. Enjoy!