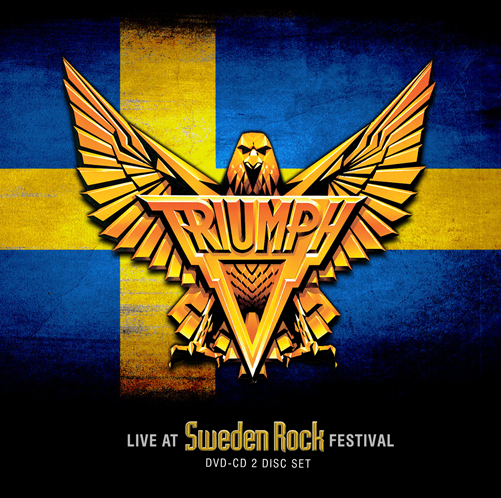 The fans demanded it, and the fans finally got it. After 20 years apart, the long-awaited Triumph reunion (of vocalist/guitarist Rik Emmett, bassist/keyboardist Mike Levine, and vocalist/drummer Gil Moore) took place at Sweden Rock Festival, on June 7th, 2008. And on August 28th, 2012, fans outside of Sweden will finally get a chance to see, hear, and experience this awesome reunion.

The ‘Live at Sweden Rock Festival’ set consists of a DVD and CD (both featuring identical track listings), and features all of the Triumph classics fans could hope for.. including – “When the Lights Go Down,” “Lay It On the Line, “Never Surrender,” “Magic Power,” and “Fight the Good Fight “.

Frontiers Records to reissue the original TRIUMPH catalogue in Europe. 10 classic albums, in digipak version and with the original tracklistings, will be released on December 3rd. In addition, a limited collector’s edition Box Set entitled Diamond Collection which will include all the 10 albums in vinyl replica, and will feature the artwork from the original vinyl edition of the albums.

While future plans remain uncertain for the band, and after the recent reunion shows, the time to re-live the impressive legacy of their music has come. This new set of reissues is a real present to the Triumph fans, both old and new, who now have the opportunity to own these timeless masterpieces of Classic Rock. Enjoy!

Actor Adam Sandler has always had a knack for including standout classic rock tunes in his movies. His latest flick, Grown Ups, is no different, as Triumph’s hard rocking “Lay it on the Line” is included in the movie, which opens nationwide June 25

Mike Levine sat down with Tracey Lukasik from Backstage Axxes to dish on everything from new releases, getting pulled over by a hick cop and of course what all Triumph fans want to know, a possible reunioin tour!

Helping to raise awareness and money for diabetes, Triumph will be donating autographed merchandise to the Rock Against Diabetes auction.