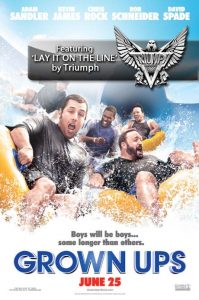 Actor Adam Sandler has always had a knack for including standout classic rock tunes in his movies. His latest flick, Grown Ups, is no different, as Triumph’s hard rocking “Lay it on the Line” is included in the movie, which opens nationwide June 25

Also, the official Japanese release of their new best of set, Triumph: Greatest Hits: Remixed, hit the Land of the Rising Sun on June 23.

Greatest Hits: Remixed was released in the US and Canada on May 18th, and throughout Europe during May as well. All of Triumph’s classic tunes that were – and continue to be – in heavy rotation on rock radio (and the early days of MTV) are included here, namely, the aforementioned “Lay it on the Line,” as well as “Hold On,” “Fight the Good Fight,” “Magic Power,” etc.

These fourteen tracks of anthemic metal have never sounded so good, as they were all recently remixed by Rich Chycki (who has recently worked with Aerosmith and Rush). The set also includes a previously unreleased recording – “Love Hurts” – which will be the lead-off single from Triumph’s Greatest Hits: Remixed.

“We have been planning this release forever,” says bassist Mike Levine. “For years, Triumph fans have been demanding that we give them a fresh greatest hits package and they are going to love this one.”

Also included in the set is a DVD, mixed in 5.1 audio, that features eleven promo and live videos in widescreen (plus additional unreleased videos for “Child of the City,” “Blinding Light Show,” and “Love Hurts”, and footage of the group’s 2008 induction into the Canadian Music Hall of Fame).

The deluxe two-disc package is housed in a six-panel digi pak – including a 20-page color booklet, complete with liner notes, lyrics, and chockfull of vintage photos.

Whether you’re a long-time Triumph fanatic or a new convert, you have never heard the group as crystal clear and loud n’ proud as you will throughout Greatest Hits: Remixed. “Greatest Hits: Remixed rocks like no other Triumph set,” declares drummer Gil Moore. “This is the definitive Triumph collector’s edition.”

Track listing for Greatest Hits: Remixed DVD:
1. Follow Your Heart
2. Lay it on the line
3. Spellbound
4. Magic Power
5. When the Lights Go Down
6. Hold On
7. Just One Night
8. Somebody’s Out There
9. Allied Forces
10. Never Surrender
11. Never Say Never