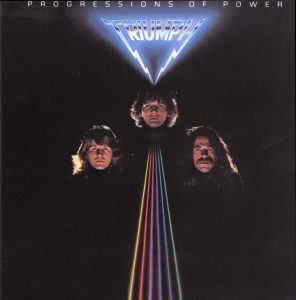 Progressions was somewhat of a crossroads album for this power-trio band from Canada. The band’s third release retains a certain amount of that raw and gritty sound of “Rock & Roll Machine”, but also contains some smooth, melodic arena rock which would become the band’s calling card on future releases. Drummer Gil Moore handles lead vocals on five of the eight tracks with vocals. Emmett’s high, smooth vocals are added to “In the Night”, “Take My Heart” and album closer “Hard Road”, which is also one of the albums best tracks. Actually, the album opens and closes on a high note. “I Live for the Weekend” is a fantastic anthem. “Take My Heart” is probably the weakest moment on the album, being the obligatory ballad that just isn’t one of the band’s best. “Fingertalkin” is a classical guitar instrumental, that showcases Emmett’s charismatic guitar style.

“Progressions of Power” was initially released on RCA Records and peaked at #32 on the Billboard album charts in 1980. The album was later re-released in 1985 on MCA, in 1995 on TRC and then finally remastered in 2005 and released on the band’s own TML Entertainment label.