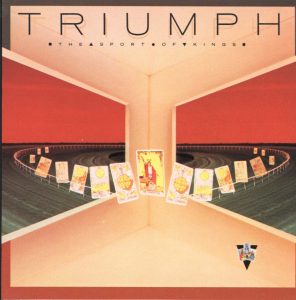 The Songs: Tears In The Rain / Somebody’s Out There / What Rules My Heart / If Only / Hooked On You / Take A Stand / Just One Night / Embrujo (Instrumental) / Play With The Fire / Don’t Love Anybody Else But Me / In The Middle Of The Night

1986 – man even the year brings back a warm sense of nostalgia. The radio still played rock and roll, and hair metal was killing rock for everybody who liked big guitars and bombastic drums. Triumph was still Canada’s other power trio. Gil, Rik, and Mike were still functioning in relative harmony and Sport of Kings was another solid record. I’ll admit to a bias toward Rik’s songs and voice in the band. As the guitar player he was front and centre, and viewed by default as the front man. This probably wasn’t a good position for Gil who as the other singer, songwriter and as the drummer he was at the back on the riser. Although part of the fun on a Triumph album was the interplay between Rik and Gil – on this one each had a pretty solid hit. “Somebody Out” There for Rik, and “Just One Night” for Gil.

Musically this one is typical of the time. Triumph was always a hit and miss band for me. I’d like some of the songs, but rarely did an entire album strike home for me. This one was close – there’s really no filler, just solid rock songs – but nothing that truly pushes it to the next level.