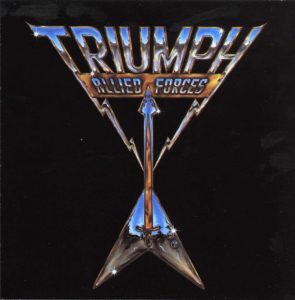 “Allied Forces” is without a doubt Triumph’s most popular album and for good reason, it’s a great album. It’s a fairly short album, with only eight real tracks clocking in at under forty minutes long. There is also short sound effects track called “Air Raid” that acts as an introduction to the screaming heavy metal title track. “Allied Forces” may be one of the band’s fastest and heaviest songs, and on of my personal favorites from the band’s catalog. Of course “Fight the Good Fight” is the band’s signature track and is still on regular rotation on classic rock stations across the globe. Rik Emmet’s vocals on this song are glass shatteringly high and still sends chills up my spine each time I hear it. “Magic Power” is another cut from this CD that became a hit for the band, and a standout track in the band’s catalog. “Petite Etude”is Emmett’s solo showcase and allowed him to flex his musical muscle and show his diverse talents. “Allied Forces” was Triumph at the top of their collective game. I can say without blinking an eye that it is one of the greatest hard rock albums of all time.