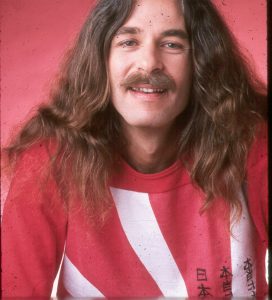 ‘The man behind the moustache’!

During that summer, Mike was 26 years old (making him a ripe ol’ 44 at this moment in 1997)  and is a Gemini. Previous to Triumph, he spent a few years in New York and some time in England (no mention of what he was doing – but I’ll guess there was the odd party). He’s been playing bass since the age of 10 and has been influenced  by Richard Davis, Sly Stone and Phil Spector.

According to the concert program, Mike likes, “money, sex and room service” (so, who doesn’t?). He also likes his old Fenders, JBL speakers, Crown amps, Reflex cabinets and Hammond B3’s. Let’s remember, this list was compiled in 1979, so a bit must have changed (does anyone still use B3’s anymore?..) .