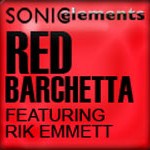 For the first time Rik Emmett of the classic Canadian rock power trio TRIUMPH sang and played guitar in a unique “virtual collaboration” with a member of another legendary Canadian rock power trio, Rush. Rik performed as a guest artist with fantasy rock band “Sonic Elements” on a cover of the song ‘Red Barchetta’ which features drums performed by legendary Rush drummer Neil Peart via a music software sample library called “Neil Peart Drums” by Sonic Reality. Dave Kerzner, CEO and founder of Sonic Reality, put together a unique music project called “Sonic Elements” where various singers and musicians of progressive rock perform and record along with sampled musical elements from the music software Sonic Reality creates for musicians.

“At Sonic Reality we record (aka “sample”) the sounds of musical instruments and drum grooves so that musicians can use these deluxe sound elements in their own music on the computer or mobile devices.” says Kerzner “I created the Sonic Elements music project to not only show what these inspiring Sonic Reality sounds are like in musical context but to also explore giving songs an alternate reality with different fantasy combinations of musicians and authentic sounds.”

A premium example of such a fantasy rock scenario is ‘Red Barchetta’ featuring Rik Emmett which is another take on the classic Rush song with new life brought to it by Rik’s passionate performance and interpretation.

Here’s what Rik Emmett had to say about the project:
“It was such a great day in the studio, jamming out to Neil’s incredible tracks, getting to play virtual ‘basement band’ and laying down my versions of Geddy & Alex parts. I felt like I had been transported back to 1980 for an afternoon. ‘Red Barchetta’ is one of my absolute fave RUSH songs… like an exciting, Ray Bradbury-esque SF short story, told by a progressive rock band… so to get a crack at it, with the actual drum takes that Neil performed, was an ‘artistic’ challenge – almost like accepting a dare.” Says Emmett “This is like “Rock Band” for the seriously, deeply committed.”

The full release of the song ‘Red Barchetta’ by Sonic Elements featuring Rik Emmett is coming in Q1, 2012 and is part of a larger collection of songs with Sonic Elements and other guest artists performing with Neil Peart Drums by Sonic Reality.

About the Sonic Elements project and Neil Peart Drums:

Dave Kerzner of the music software company Sonic Reality has headed up a unique “virtual fantasy rock band” called “Sonic Elements” combining the sounds and performances captured in Sonic Reality music software and sound library products such as Neil Peart Drums with performances of guest musicians like Rik Emmett on classic covers like ‘Red Barchetta’ by Rush. Collaborating through the use of the sample library “Neil Peart Drums” which was performed by legendary Rush drummer Neil Peart and recorded by top producer Nick Raskulinecz is something that any musician who owns the product can do. Neil’s digitally recreated DW® Snakes and Arrows drum kit in software or soon to be released audio grooves to play along to or loops can be used in any recording software on the Mac, PC or iPad™. To celebrate that concept Sonic Elements have been working up an entire Rush tribute album as well as original songs all built around Neil Peart Drums with various guest guitarists, bass players and vocalists including Rik Emmett (Triumph), Billy Sherwood (Yes, Circa), John Wesley (Porcupine Tree, Marillion) and many other classic and progressive rock musicians.