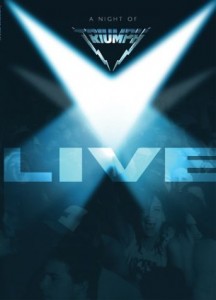 For a band that hasn’t performed together since the late 1980s, TRIUMPH has been keeping a high profile in the music scene. TRIUMPH: A NIGHT OF TRIUMPH captures the band live at the Metro Center in Halifax, Nova Scotia. The concert was performed on September January 16, and the band was in support of their just released SPORT OF KINGS album. Together Gil Moore, Mike Levine, and Rik Emmett perform a razor-sharp set of their best material in front of 10,000 screaming mad Canadian rock fans

Rik Emmett (guitars/vocals), Gil Moore (drums/vocals) and Mike Levine (bass/keyboards) are Triumph, a vastly underrated band in comparison to the other famous trio hailing from Canada, Rush. They did not make their name by having any hit singles; it took them time to gather their audience through endless live performances. Live At The US Festival is a remastered version of the original concert held before a half million people in 1983 in the burning heat of the Southern California desert.